Brands on the Run 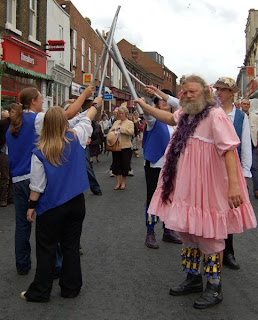 I am interested in the psychology of marketing. I'm not proud of it, but a man's got to be interested in something (other than football & women) and it's better than stamp-collecting, train-spotting or morris-dancing. Although in its defence I understand now that morris-dancing is all about the beer; it's an excuse to go on day-long pub-crawls with your mates. Apparently wives don't mind as they know their morris-dancing spouses have no chance of pulling whilst wearing silly clothes, bells on their ankles and carrying sticks. They might want to consider the shame of having their loved-ones seen publicly in this pursuit though.

I digress. I can defend my interest in the mechanics of marketing as it's a by-product of my work. I have had cause to work alongside marketing-folk in promoting events or radio stations or the like. It comes to mind now as one of my key clients, Virgin Radio is in the process of changing its name. Consequently some of my friends and colleagues have spent many hours in, and out of, over-illuminated boardrooms agonising over whether the brand means more than its name.

Of course it does, but sometimes there is scant evidence to support this. Let's take some popular current media campaigns. You may have seen the Aryan-type racing a car around Germanic landmarks with Wagner blasting in the background, or the supporting press ads featuring the Eagle made of car-parts. You might possibly have been able to correctly recognise that this ad is for Citroen, or more likely that it was some French car-maker claiming to have learned something from the Teutonic race. Personally I feel that the possible reason that some people buy Citroen is that they're not German. They're buying them for their non-Deutsche features. Presumably if you wanted a car with German efficiency and features then you'd buy a VW or a BMW, or whatever. Why would you want to buy fake German?

My main worry (as someone interested in the psychology) would be that Citroen are undermining their brand. Are they suggesting that up to this point the cars they made were basically crap? That they needed to nick ideas from their European neighbours? Do Citroen play these ads in their increasingly-patriotic homeland? I doubt it.

By contrast the Germans seem to be on the run; the last BMW ad I saw seemed to be so similar to the recent Honda ads that I'd think they could be sued for plagiarism. The French want to be German but the German's know that drivers now think in Japanese.

Another, more subtle, example is Gordon's Gin. No doubt you've seen the billboards and press-ads. You may not remember them, because essentially it's just another picture of Gordon Ramsay with a slogan and a bottle. You see the link obviously, Gordon Ramsay - Gordon's Gin. Except, of course, it isn't Ramsay's gin - it's Alexander Gordon's gin, and was invented hundreds of years before Ramsay was even born.

I don't drink gin, and the presence of a potty-mouthed celebrity-chef wouldn't change that habit even if I do like him on TV. I guess they're playing on the concept that it's something to do with 'taste' - both Gordon's have it. To the untrained eye though I would suspect it just makes it look like Ramsay owns it. I suspect that he's also linked to a lot of other products, in and out of the kitchen. Consequently his impact is diminished and the brand is devalued.

What's in a name? When Virgin Megastores became Zavvi their profits actually increased, even though that looks like a crap name. Marathon became Snickers to align with its European branding which sort of makes sense, I didn't stop buying them. Now it's going back to being called Marathon which is slightly more perplexing as a whole generation will have grown up with Snickers!

Within a month when Virgin Radio definitively and decisively becomes Absolute Radio it will still have a similar music policy and key-presenters and the new owners will want to improve and promote if anything. Do people listen to a radio station because of its name? Fortunately the research says no. Like many Virgin-named brands, it hasn't been Branson-owned in many years, the name is licensed, and the new owners don't see the point in investing in a brand which they can never properly own. Many things in marketing confuse me, but this seems to make great sense. For the sake of my business I hope that everyone else agrees.
Absolute Radio advertising brands marketing Virgin Radio

There has been a concerted attempt by conservative commentators to label the Black Lives Matter protesters as ‘left wing’. Since there is no obvious way to determine the party politics or influences of a large group this has no basis in fact. So, why bother? If the right wants to let us know that it’s only the left that care about equality, I’m fine with that. As Conservative Home Secretary Priti Patel is an Asian woman who backs a law that would’ve prevented her own parents from entering the country , it may be a safe assumption. Since the BLM protesters were a young group it is likely that their allegiances to any party are quite loose. Statistically they’re more likely to be apolitical or non-voting   as they are to be identified by links to party or doctrine. So why do the ‘right’ want to label the demonstrators as ‘left’? The simple fact is that demonstrating in itself is seen as provocative. It is easier to sit on the fence (or the sofa) than to stand up for som