April 30, 2009
It's all about the language. A swine-flu outbreak is probably less worrying than an epidemic which, in turn, is less concerning than a pandemic.

Pandemic sounds catastrophic. The reasons for this are obvious. For one it reminds us instantly of panic and also of pandemonium. When you think of pandemonium you may not think of the dictionary explanation (below from dictionary.com) but even so, you know it's bad. 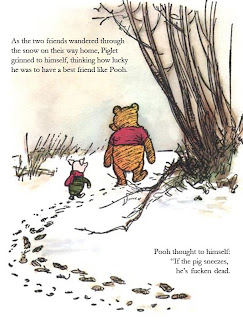 Had the media been hamming it up or using similar puns we'd be a lot less worried, but instead we have the hype (written about beautifully here) and the World Health Organisation with their helpfully serious messages.

If you give numbers to the scales of risk then you run the risk of panic. If I hear numbers in this context I always think of the Richter scale or gale forces - the higher the number the greater the devastation.

Ben Goldacre's piece makes the point very clearly - the margins of error are huge. More people are dying of other diseases but we don't have the same level of panic about those - which is probably to do with the means of transmission.

It seems that once every few years we have to have something to panic about, the language makes that very obvious.