February 24, 2017
There’s an easy conclusion to be drawn from our political woes. We love to be ruled.


It’s 2017 and we still support and fund the monarchy, so that points towards this supposition. Far more relevant though is the obvious realisation that we like all of our politicians to be cut from the same ermine cloth.
It is, to a degree, logical that we warm to the bright, smartly-dressed, well-raised and educated in society, that we should want them to lead us. Is it logical though that most of them should’ve studied at Oxbridge establishments and an overwhelming number have the same degree – Oxford’s Philosophy, Politics & Economics? There’s a good reason why The Guardian called it the degree that rules Britain.


It is still painfully hard for children from poorer families to achieve high standards of education and getting to Oxbridge is such a pipe dream that those who do so are still likely to be featured in their local newspaper. It’s an achievement. If you’re from the northern half of the country even more so. The Daily Mail, whom I hate to link to, even notes that ‘five top schools send as many pupils to Oxford and Cambridge as 1,800 state schools put together’. This is inequality and we continue to vote it in.


The three-tier (upper, middle, working) class system may have fragmented but the voting classes still appear to respect it and vote for those who claim to be able to help them move through it.
The reality is that the relative proportion of people moving up or down a class now seems to be reversing. “More men and women are experiencing downward mobility and fewer of them experience upward mobility than before,” says Erzsebet Bukodi at the University of Oxford, who calls it “the dark side of the Golden Age of Mobility”.


No doubt I’m over-simplifying but when we vote at all (note Stoke’s woeful 38% turnout) we continually vote for those who promise jam tomorrow even when the evidence proves they’ve rarely given us any jam at all. Trickle-down economics has failed, austerity is a disaster and three party politics nose-dived into the dust. Yet the Conservatives can win a seat Labour had held for 80 years.
Whether the masses ever had real compassion is open to question, they certainly appear to have less than ever right now. We live in a blame culture, unable to see the bigger picture. Is it any wonder that people vote for those who give them someone else to hold responsible? We vote for ourselves and not the greater good, narrow rather than open minded, and with emotion instead of logic.


As long as Oxbridge girl (or boy) says it’s going to be OK then we’ll accept it like the respectful underclass that we are, doffing our caps as our lords and masters deign to splash horse-shit upon us from the wheels of their gilded carriages. The imagery may have changed but the reality hasn’t. 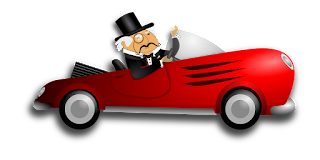