May 14, 2013
Television was once the drug of the nation, it used to pacify us all simultaneously as we gathered around those life-changing events like the moon-landings, the 1966 World Cup Final, The Morecambe & Wise Xmas Special, Den & Angie’s Christmas Day bust-up, a serial killer being run over by a tram in Corrie......I could go on but you’d eventually notice the similarity in all of these things, they happened a very long time ago.


These days very few things provoke that ‘appointment to view’, we’d all rather time-shift or catch-up. It’d be debatable whether you actually saw that jaw-dropping, stage-managed performance live on ’s Got Talent, X Factor or whatever – you may only have cottoned on at a later stage on YouTube. That was certainly the case for Susan Boyle, a moment in time that programme makers have been desperate to re-create ever since. Yes, it went viral – it created talkability – but did it benefit the advertisers who were there in the moment?
In essence it probably did because even though more people saw it on YouTube or via Facebook shares it still helped to create the brand of ‘’s Got Talent’ which would’ve helped ad sales and possibly even share prices for ITV. More than this it ushered in an era where the TV companies joined the great content race, the battle to generate a blip of interest that would be emblazoned on a billion eyeballs. It became all about the content.

For those of us who are particular or pedantic about such miniscule things as language, content is a potentially divisive word. Would we dismiss all great art in such a way or was this only to define short bursts of material? Either way it became the buzz-word and people working in creative industries suddenly became ‘content-generators’ producing excerpts of things that could be used across boundaries, formats or devices.


In many senses it could be argued that we were catering for the attention-deficit generation, trying to club them over the head and drag them back to the cave where they might experience more of our ‘wares’ and subconsciously more of our sales messages. Whether this was ever proven to be effective remains a moot point, we now seem to have moved on in stages – trying now to create a dialogue, an exchange first through the medium of ‘user-generated’ participation and subsequently through likes, shares, comments, re-tweets, etc.
I’m already tired of the ‘hash-tag’, the # symbol that’s meant to unify all interaction. Possibly I’m not of that generation but it feels like trying too hard to herd sheep, you can easily feel manipulated by the machinations of programme marketing teams whom you well-know are generating content and titles that are specifically intended to provoke a response.


It was hard to feel any other way about C4’s new reality escapade, Skint. A nice five letter word title that won’t impinge too much on the 140 character tirade that’ll accompany your viewing ‘pleasure’; content that seemed designed to inflame without digging too deep for the underlying causes; characters that were too clichéd and perfect to have ever been written. It was a real-life Shameless with no need for a narrative.
There may be a place for such TV (and Channel 4 may be it) but it somehow seemed too manipulative, conveniently timed to coincide with the impact of the Government’s welfare reforms and also replace the travelling community as the source of our gawping, jaw-dropping, incredulous voyeurism, pure poverty-porn. I’m sure C4 will balance things up in time, perhaps with an expose of the right-wing loons of UKIP or similar but for now it was hard not to feel grubby and also annoyingly self-righteous whilst watching Skint .


Just when you think British TV is dragging itself back fromthe brink it kicks you back into the gutter. It proves nothing more than there are too many hours for TV channels to try and fill, to persuade you away from other entertainment sources. Some have graduated to better drama with Broadchurch, The Fall or The Politician’s Husband (despite its limited duration and conveniently tidy ending) but others know they can pander to the tabloid generation, get instant reaction and gratification online and – worse still - get us to share their content.
Calling some TV ‘content’ is derogatory, dismissive, reductive and presumably offensive to those that spent hours working on it – writers or performers. In other cases the term is justifiable and we should be far from content to have played host to it.
Channel 4 content hash-tag ITV marketing poverty Skint social media television TV

After the screaming stops, everything stops The Bros documentary, After The Screaming Stops, which was screened by the BBC over Christmas, is almost unique as a piece of cultural and social history with additional psychological interest.
Naturally, that’s not what draws you in. Instead you’re beguiled by a voyeuristic glimpse of diva-esque pop drama and sibling rivalry with the promise of real-life ‘The Office/Partridge’ moments. I hadn’t even intended to watch it but the social media furore made it irresistible.
I’m as much a voyeur as anyone else, I particularly enjoy seeing self-importance ridiculed and egos pricked, so I was initially enraptured but eventually began to see the deeper relevance to modern culture and mental health issues, realising how very little has changed.
With ATSS you could see how that self-importance is developed and enabled by the music industry. In one of the more dramatic arguments that festered in a crowded rehearsal studio the brothers went at it while …

There has been a concerted attempt by conservative commentators to label the Black Lives Matter protesters as ‘left wing’. Since there is no obvious way to determine the party politics or influences of a large group this has no basis in fact. So, why bother?
If the right wants to let us know that it’s only the left that care about equality, I’m fine with that. As Conservative Home Secretary Priti Patel is an Asian woman who backs a law that would’ve prevented her own parents from entering the country, it may be a safe assumption.
Since the BLM protesters were a young group it is likely that their allegiances to any party are quite loose. Statistically they’re more likely to be apolitical or non-votingas they are to be identified by links to party or doctrine.
So why do the ‘right’ want to label the demonstrators as ‘left’? The simple fact is that demonstrating in itself is seen as provocative. It is easier to sit on the fence (or the sofa) than to stand up for something. Media coverag… 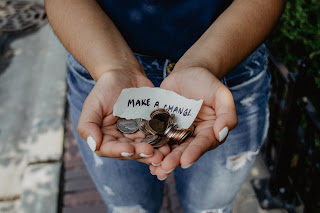 I’m in awe of anyone who can raise over a million pounds for any cause. Raising over £20 million is quite staggering, and inspiring. It also proves a few things, one of which is that the best ideas are simple and organic. No one would have imagined that Captain Tom Moore could do this by strolling back and forth in his garden but the individual and the cause were a significant driver at a time when the country is desperate for good news.
It also possibly proves that people are willing to give more of their own ‘hard-earned’ when they can see where it’s going. This is a wider topic that I don’t have the time, or intellect, to cover but it should provoke a conversation about transparency in Government spending, part of which was discussed by a recent Freakonomics podcast. Would we hate taxes less if Government was more open about where every penny goes?
As we saw with the Brexit vote, the details of specific spending can be manipulated to bend opinion, perhaps it’s time they were used …