November 17, 2008
I don't really understand 'art'. This may not come as a great surprise to you; possibly you already have me typecast as the archetypal black-country-bloke. I'm not about to burst that bubble at the altar of modern art, or any art from any era come to think of it. Or any altar. 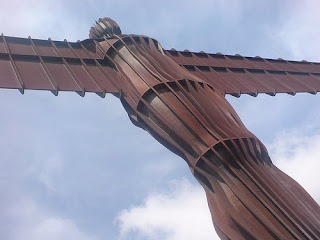 This is not to say that I don't appreciate art, I recently stood in awe at the base of 'The Angel Of The North' and consider most of Gormley's work to be quite brilliant. I suspect that - like music - the concept of what we individually consider to be 'great art' is a hugely personal decision. And then there's the other stuff.

Every week or month there is some example of the 'other stuff' to inflame or amuse us, even when rational common sense demands that we should simply ignore it. This week it comes courtesy of Andy Savage and his lightswitches at the Arnolfini Gallery in Bristol.

I know a lot of people in new-build houses who'll be ecstatic to discover that what they'd originally considered to be an electrical design fault is actually a priceless work of art. Or possibly it only counts as art if it features in a gallery and was installed by someone who might have attended Art College.

I suspect this is the crux of our argument with 'art'. Can it only be called by the correct terminology if it has a scruffy but pretentious tosser applying some deep & hidden meaning to it? Witness Damien Hirst's work, a pickled shark in formaldehyde? That'll be 'The Physical Impossibility of Death in the Mind of Someone Living' of course.

I generally like Hirst although I wouldn't pay to see his work; I think he's earned enough. I don't have a problem with anyone's perception of what art might be. I figure that quite a few people are probably more culturally liberated than I am. I suspect my problem is related to what I consider to be the 'emperor's new clothes' - an unmade bed being 'art' because Tracey Emin put hers in a gallery.

If art is truly something that appeals to the emotions, above all other senses then we choose the art that we love. I consider the song 'God Only Knows' by The Beach Boys to be a work of art. On the basis of charging for modern art would it be the case that if Brian Wilson had only made one recording of the song and sold it to the highest bidder he'd have earned more than the £70.5m that Damien Hirst trousered last week?

On the other hand there is Banksy. That his stencils earn lots of money might be dubious but the fact that his work is greatly accessible, often has a point to make and pops up in random locations is reaching the masses in a way that most galleries never will. What's not to love?

That this argument is cyclical and ever recurring is obvious. However, I was surprised to find that people were making the same points over a century ago:

"To say that a work of art is good, but incomprehensible to the majority of men, is the same as saying of some kind of food that it is very good but that most people can't eat it."
Leo Tolstoy, What Is Art? (1898)

I can't argue with that.
Angel of the North art Banksy Damien Hurst lightswitch Tracey Emin